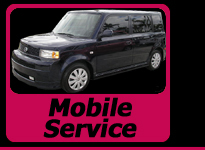 NOT in the Philadelphia area and
need a dent fixed? Click here!